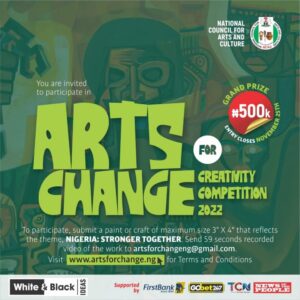 Organisers of ArtsForChange, a creative talent hunt competition powered by
Black & White Ideas in conjunction with National Council for Arts and Culture (NCAC), has unveiled the judges for the 2022 edition.

The judges are expected to screen all the multitude of entries submitted and to recommend top ten works for final consideration at the second round to select a final winner.

Judges are to consider, adherence to the theme of the competition which is Nigeria: Stronger Together, creativity, aesthetic and originality of each work submitted.

The judges unveiled by the organisers are Oliver Enwonwu, a renowned Visual Artist who holds a Master’s Degree in Visual Art from the University of Lagos, Nigeria; Halima Abubakar, a freelance Documentary Photographer who is currently the Artistic Director and Curator for the 19th Emir of Zazzazu; Mufu Onifade, inventor of the Araism painting technique and founder of the now famous Araism Movement and Steve Ayorinde, cultured journalist and former Commissioner for Tourism, Arts, and Culture in Lagos State.

Enwonwu comes from a long line of artists; his grandfather was a reputable traditional sculptor and his father Ben was widely celebrated as Africa’s pioneer modernist. In his work, Enwonwu elevates Black culture to challenge racial injustice and systemic racism by celebrating the cultural, political, and socio-economic achievements of Africans through an examination of African spirituality, Black identity and migration, contemporary African politics, Pan Africanism, and the global Africa empowerment movement.

From 2009 to July 2021, Enwonwu served as the President of the Society of Nigerian Artists, established in 1963 as the umbrella professional body for all artists in Nigeria, which exists to engender the highest standards of practice and teaching of the visual arts in Nigeria.

On her part, Abubakar is a freelance documentary photographer, researcher, archivist, and artist with an insatiable interest in exploring culture and identity.

She started her photography journey by exhibiting at Lagos Photo Festival 2012. In 2013, she co-won the prize for the outstanding concept at the National Art Competition themed “IDENTITTY”.

Abubakar’s work interrogates the environment around her through her long-term projects aiming to depict her life experiences through a combination of colour, texture, patterns, and symbolism. These are captured through the conceptual visual narratives that she weaves, often through the idea of self-portraiture, in expressionistic and diaristic ways. She has a high level of credibility when it comes to her practice and creatively stays true to any subject matter she is exploring.

A critical thinker, this helps give her the discipline to be rational, open-minded, and factual about topics she explores. As an advocate for preserving history and cultural heritage, Abubakar works on projects that will help inform future generations about things they will never experience.

On his part, Onifade is celebrated for many first. He is an award-winning artist trained at The Polytechnic, Ibadan (National Diploma) and the Obafemi Awolowo University, Ile-Ife (B.A, Fine Arts), and won the Best Student Prizes.

He earlier attended the African Art Museum and Training Institute, Ethiopia where he obtained a Certificate of Training in Painting on Animal Skin, and much later, the Obafemi Awolowo University, Ile-Ife, for his M. A., Art History.

Onifade has held three solo exhibitions, one joint exhibition, and over 100 group exhibitions. In 2010, he was among the five international artists selected from Nigeria, Barbados, the USA, and South Africa to take part in the Greatmore Art Studio’s Residency programme in Cape Town, South Africa. He was also one of the 26 artists selected from across the world to participate in the Great Walk and More Art Festival in Cape Town.

He was one of the 16 artists selected from seven countries to take part in an art project titled ’16 Pieces’ organized by the Ifa-Yoruba Contemporary Trust, UK, funded by the London Arts Board. Onifade has successfully participated in international exhibitions in Nigeria, France, Belgium, Austria, the UK, the USA, etc.

Among many local and international art competitions, Onifade, a Fellow of the Society of Nigerian Artists (fsna) has been an adjudicator for the annual National Festival of Arts and Culture by the National Council for Arts and Culture, Felabration Arts Competition, MODHAFEST Art Competition and many more.

He was also at a point the Managing Director/Editor-In-Chief of the National Mirror Newspaper. Before then, Ayorinde was the Editor of The Punch Newspaper in Nigeria.

An author, Ayorinde has credit for three books namely Masterpieces: A Critic’s Timeless Report (Spectrum Books, 2008); Abokede: The Man, The Hill, The City (ArtPillar Books, 2011) and Cascade of Change: A Decade of Liberal Thoughts (Liberal Publishing, 2015). He also edited For Law, For Country: Conversations with the Bar and the Bench (Global Media Mirror Publications, 2012).

Speaking at a judge unveiling event held recently in Lagos, Mr. Titiloye Amzat, a representative of Black & White Ideas, noted that the judges for this edition of the competition are some of the finest in the industry. According to him, they were picked based on their achievements over the years in the creative industry.

He said, “For us at Black & White Ideas, only the best would do as judges. The judges for this edition are some of the best we have around.

“A knowledgeable art writer, a Master’s Degree holder in Visual Art, the creator of a unique painting technique, Araism and a documentary Photographer, what more can you ask for as far as raising the bar in talent discovery and promotion is concerned?

“Having been selected, they now have the responsibility of picking the best entries from the multitude of entries submitted with a focus on four core areas namely, adherence to the theme of the competition which is; ‘Nigeria: Stronger Together’, originality of the work, creativity, and the aesthetic of the work.

“I also want to use this opportunity to appreciate our partner, First Bank, they have truly proven their support of the arts,” Mr. Amzat concluded.

ArtsForChange promotes authentic Nigerian culture and encourages artists of all manners to show their creative side in a bid to unearth and promote young and yet unknown talents in the country.

Entry for the 2022 edition closed on November 25, with over 500 entries received from six zones of the country namely North West, North East, North Central, South-South, South East, and South West.

The unveiling of the winner and presentations of the grand prize will take place this month with the winner
walking away with N500,000, while other shortlisted participants will win consolation gifts and certificates of commendation.