ArtsForChange Begins Screening of Entries
—Thanks Firstbank for the partnership

Organisers of ArtsForChange have confirmed the closure of entry for this year creative talent hunt competition. 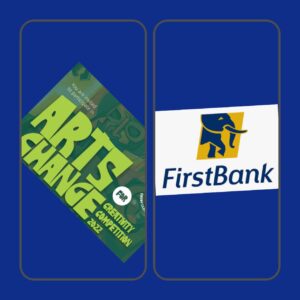 The competition aimed at uncovering, and promoting creativity amongst Nigerian youths in the area of art is the brainchild of White & Black Ideas in conjunction with the Olusegun Runsewe-led National Council For Arts And Culture (NCAC).

At a press conference held recently, organisers informed journalists about the progression of the competition, confirming over 500 entries were received across the nation.

According to Titiloye Amzat of ArtsForChange, entry for the competition closed on November 25, with a torrent of entries received from six zones of the country namely North West, North East, North Central, South-South, South East, and South West.

He announced the assemblage of judges, adding that while screening the entries they will focus on four core areas namely, adherence to the theme of the competition which Nigeria: Stronger Together, originality of the work, creativity, and the aesthetic of the work.

He added that the announcement of the winner and presentations of grand prize will take place in January 2023.

The winner of the competition will walk away with the grand prize of N 500,000, while other shortlisted participants will win consolation gifts and certificates of commendation.

Black & White Ideas via ArtsForChange promotes authentic Nigerian culture and encourages artists of all manners to show their creative side in a bid to unearth and promote young and yet unknown talents in the country.

Concluding, the organisers singled out First Bank for it’s partnership and described the institution as a bank that support creativity.