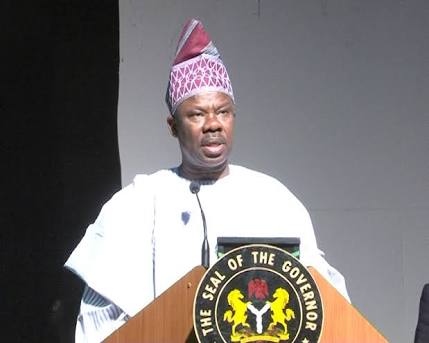 The crude and authoritarian manner the Governor of Ogun State Ibikunle Amosun is discharging his duties as the Chief Executive of the Gateway State because of his inordinate ambitions to perpetuate his stay in governance even after his tenure is now
a source of worry to many people in the State.

Amosun’s lack of democratic finesse and decorum of an egalitarian society has already pitched him against so many sections of the society he rules like a demi-god.He has over time espoused his own home-grown political values and ideals which an alien to those of a civilized society one can think of.

Amosun’s political manoeuvrings occasioned by his selfish ambitions in the run up to 2019 general elections has already pitched him against many of old political associates who have helped his cause in the past. He is always at loggerheads with the Labour Union, the civil servants and the entire citizens of Ogun State because of his autocratic style of governance.

According to Global News sources, Governor Ibikunle Amosun is now waging a serious war on his old political opponents and any one who seem to have a dissenting or opposing political views from his.All over the State,evidences abound of how he has crudely dealt with those who had tried to put him on the right path of governance.

We gathered that Amosun is now waging war against the loyalists of Senator Adeola Yayi who is gunning for the number one seat in Ogun State come 2019 and who enjoys the support of Asiwaju Bola Tinubu and many across the State.Amosun is allegedly pulling down the political structures of Yayi and his supporters in Ogun State in order to ensure his own candidate emerges as the next Governor of Ogun State.Just last week, a very close associate of Senator Yayi who is planning to run for a seat in the Federal House of Representatives had his business premises sealed on the orders of Amosun who sees him as a threat to his own (Amosun) candidate in that Federal constituency.

Global News also learnt that the on-going feud between Governor Amosun and the Senate member representing Ogun State Central Senatorial District, Dr Lanre Tejuoso ,has taken an interesting dimension as Amosun is now plotting a fresh move to block the gentleman from re-contesting the seat because he(Amosun) himself is planning vie for the seat come 2019. Amosun is reported to have boycotted many peace meetings aimed at resolving the matter because he is not ready to give the seat to Tejuosho.

Amosun is also alleged to have embarked on destroying the political ambitions of those who are defecting from his camp like his former Commissioner for Co-operative and Community Development and a serving consultant in his Cabinet,Hon Sam Aiyedogbon who openly declared during his Christmas party at his Sango-Ota residence to work for Senator Adeola Yayi’s gubernatorial ambitions.

Amosun also sacked one of his Special Assistants about two weeks ago for affiliating with Yayi. Amosun is also about to destroy the whole parking lot of Continental Suites (for the proposed 10-lane road construction is about to flag off) whose owner is said to be in the opposing camp.Amosun is out to destroy the owner of the said 3-star hotel because he worked against Amosun for a Yewa politician in the last general elections. Amosun also makes sure that the government he leads never patronize the said Hotel which is a major player in the tourism sector of Ogun State.