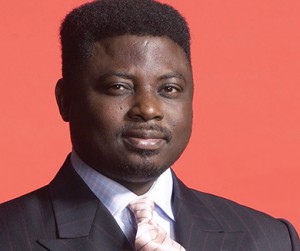 It was on a Friday afternoon in the heat of the sun that he walked into the office of Global News magazine, sporting a pair of blue tracksuit trousers and a polo T shirt with a matching cap to disguise his look. Blinking from his right ear like a Yahoo boy that just came into money was a hands-free Bluetooth gadget, he introduced himself as Matthew Ashimolowo, the presiding pastor of the Kingsway International Christian Church (KICC).

The visit to Global News, according to him, was to air his displeasure concerning reports about him in our past editions which he claimed caused him so much pain. The pastor, who came in his yellow chauffeur-driven Hummer Jeep in company of a mobile policeman and another passenger who stayed outside the office, made unpalatable statements not expected of a true man of God.

After more than 30 minutes of ranting, name calling and use of uncouth language, he decided he must have said enough and took his leave.

We want to say categorically that we have nothing against Pastor Ashimolowo. We only reported what actually happened in Britain where he first established his church before he ran to Nigeria when the heat was much on him. The British tabloids liberally reported the case and here we reproduce the version of The Guardian of UK.

Church That Attracts 8,000 Congregation To A Disused Cinema

A pentecostal church based in a disused cinema in north-east London has emerged as one of the country’s richest religious institutions.

The Kingsway International Christian Centre, in Walthamstow, has filed company accounts which reveal it made a £4.9m profit over the last 18 months. It also has assets of £22.9m – more than three times the amount held by the foundation which maintains St Paul’s Cathedral.

The church is led by a controversial Nigerian pastor, Matthew Ashimolowo, who earns a salary of £100,000 a year and preaches that God wants you rich.

His church’s wealth stems largely from the donations it encourages from its 8,000-strong largely African and Caribbean congregation. They gave £9.5m in tithes and offerings in the 18 months to April 2008, dwarfing the £33,000 that the average Church of England congregation gave over the same period.

Rather than a more traditional plate collection, forms are handed out to worshippers so they can make bank transfers at some services.

KICC’s wealth is the clearest sign yet of the gathering popularity of evangelical pentecostalism which is the only growing branch ofChristianity in the UK with an estimated 300,000 weekly worshippers. This Easter Sunday KICC is running five services over 12 hours which are expected to attract 5,000 worshippers, more than Westminster Abbey and St Paul’s Cathedral together.

The church’s increasing wealth represents a transformation in its fortunes after the discovery in 2005 by Charity Commission investigators of financial irregularities. Ashimolowo was ordered to repay £200,000 after it emerged he used church assets to buy a £13,000 Florida timeshare and £120,000 on his birthday celebrations, including £80,000 on a car. New trustees were appointed and Ashimolowo was removed from his role as chief executive.

“The last 18 months have been a period of incredible journey in the life of KICC,” said Ashimolowo in a preface to the accounts. “It has been very exciting to see God move the ministry from one level to another as we witness the increased manifestation of His glory.”

Ashimolowo is understood to earn his salary from preaching as well as royalties from sermons published in books and on DVDs through his own company. Matthew Ashimolowo Media Ministries made a profit of close to £60,000 in 2003. It has not filed accounts of trading since then although it still operates.

Four KICC directors earn between £60,000 and £80,000 each. By contrast, a typical Church of England vicar earns around £21,500 and even the Archbishop of Canterbury, who has responsibility for an active congregation of close to a million people, only earns £68,740 a year.

“This is a very well-financed business,” said a tax accountant who examined the accounts for the Guardian. “It holds more than £16m in short term investments. I am the honorary auditor of my local church and they have just £20,000 on deposit.”

The accountant, who asked not to be named because his firm audits other wealthy pentecostal churches, estimated the KICC had avoided a tax bill of at least £1.3m as a result of its charitable status.

Senior KICC officials denied the surplus meant they were taking too much from their worshippers, many of whom live in the poorest parts of London. “People give because of how they have been blessed by what they receive from the church the teaching, the prayer and the church community,” said Soji Otudeko, director of finance. “People give voluntarily and because of their love of the work of God.”

“The teaching of the church is very much about self-development,” said James McGlashan, a former oil executive who is now KICC’s chief operating officer. “If that is preaching wealth then we are preaching wealth. Becoming financially independent, owning a house, getting a degree and a better job is good.”

The church’s International Gathering of Champions conference at the Excel centre in east London last August attracted 94,000 visitors over eight days. The key message was that God wants you rich and believers are “empowered to prosper”.

According to the accounts filed with Companies House, KICC finances were boosted by the sale for £10.1m of its Waterden Road home in Hackney to the London Development Agency which needed the site for the 2012 Olympics. It is planning to spend between £50m and £80m on a five-year project to build a complex at a site in Rainham, Essex, with capacity for 8,000 worshippers, classrooms, a TV studio, bookstore and offices.

Its plans have been the subject of a public inquiry which finished last month and a planning inspector is due to report to Hazel Blears, the communities secretary. The plans were originally rejected by the Thames Gateway Development Corporation, and the church feels it is facing undue opposition to its rapid expansion.

“I think the way the KICC has been treated has been unfair,” said Otudeko. “Britain has become a less and less Christian place and planning law seems to no longer recognise places of worship in the system. I don’t think any non-religious organisation would have been treated this way.”

The salary for Matthew Ashimolowo as the KICC’s main preacher. The Archbishop of Canterbury earns £68,740

Donations made by the KICC congregation over 18 months

Profit made by KICC in the last 18 months

THE REPORT THAT NAILED HIM

The charity behind Kingsway International International Christian Centre is The King’s Ministries Trust. This was investigated by the Cahrity Commission of England and Wales between 2002 and 2005. A report of the inquiry was released in October 2005.The report concluded that there had been serious misconduct and mismanagement in the administration of the charity. At an early stage in the investigation, it was considered that the charity’s assets were at risk, and control was removed from the existing trustees and placed in the hands of an independent external company (the accountancy and management consultancy practice KPMG), who regularized the charity’s affairs.

The report found that:

   he was responsible for approving payments and benefits to himself and his wife, Yemisi, totalling more than £384,000 (section 11)

    he and his family received benefits from the Charity including:

    free accommodation for himself and family

   he had made personal purchases using the Charity’s Visa card, including the purchase of a timeshare apartment in Florida for £13,000

    over half a million pounds was paid out to Ashimolowo’s private companies, which were operated from church property and had unclear business relationships with the charity (section 15)

In a subsequent debate in the House of Lords, Lord Swinfen questioned the Charity Commission’s running of this investigation. He acknowledged the technical breach, but highlighted its openness, “This unincorporated trust has for some years been remunerating its trustees for various services and doing so quite openly. It made the mistake of not realising that it should have altered its constitution explicitly to allow that to be done.” He then questioned the cost of the investigation “With some advice from the commission and the use of the charity lawyer, the trustees of this charity could have affected these changes for some £12,000one-hundredth of the sum the commission has already spent.” He added “The commission believes, understandably, that the future success of this charity is assured by the charity having new trustees”.

82 thoughts on “Alleged Crimes Of Pastor Ashimolowo …As Reported By British Tabloid, The Guardian”