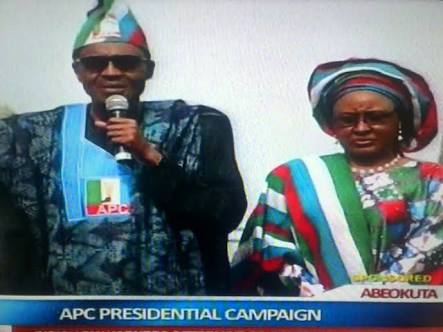 The controversy generated by the recent emotional outbursts of Nigeria’s First Lady, Aisha Buhari when she alleged that the APC-led government of President Mohammad Buhari may have been hijacked by a powerful and influential Northern cabal is yet to abate due to interesting stories that just filtered out of Aso Rock.

Global News can authoritatively report that these are not the best of times for the delectable and outspoken wife of the President who is now taking the flack for her audacity to challenge the status quo. The recent revelations by Mrs Aisha Buhari to the international media that the President has sold out by dancing the tunes of some powers-that-be in and outside Aso Rock just landed her in fresh troubles as the First Lady is said to be getting some punishments from the President, who is said to be very angry with his wife for taking him to the cleaners.

The First Lady, according to our sources, is now being closely monitored by States Security Services and other special intelligent operatives on the orders of the President, so much that she has got no more breathing space in and around Aso Rock. The saddest aspect of the fall-out of speaking her mind is the way some “plain-clothes” of the State are now encroaching on her privacy; with her private phone lines bugged and her movements to different fora being cancelled by security operatives. Mrs Buhari’s life now can be compared to that of a recluse.

Sources say Aisha received a serious tongue-lashing from the no-nonsense Buhari immediately after she returned to the country from her overseas tour where she delivered a critically acclaimed expose of a ruling party that is deeply divided about its purpose, vision and agenda for Nigerians.
A close source disclosed that if not for her status, Aisha’s diplomatic travelling documents would have been seized by the state operatives whose brief is to make life difficult for her and to let her realize she actually “belongs to the kitchen, the living room and the other room.”

Reports from sources also claim that the President is not just happy with his wife at the moment because of the monstrous political gaffe she made with her statement and is making life very difficult for her. A very close source hinted that Mrs Buhari, as a matter fact reported the President to some of his close friends and associates on how she is now being treated but the latter could not care less as he is not ready to join issues with no one on the matter.

Mrs Buhari obviously has the sympathy and a whole lot of support from the generality of right-thinking Nigerians when she washed her hubby’s dirty linen in the public, but others from a different school of thought believed that she strayed too much from the traditional roles of a Nigerian First Lady by voicing a negative opinion about her hubby’s regime; and this may be why she is now facing the dire consequences of talking tough.