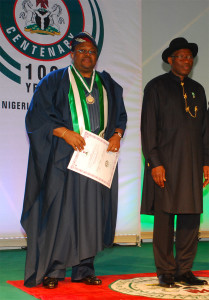 Dr. Mike Adenuga Jr, Chairman of Globacom Limited, has been conferred with the Centenary Award by President Goodluck Jonathan and the Federal Government for his outstanding entrepreneurship and immense contributions to the growth of Nigeria’s economy.

Dr. Adenuga was bestowed with the prestigious award in the category of‘Accomplished Contemporary Entrepreneurs’ on Friday night at the grand finale of the celebrations of the centenary anniversary organized to mark 100 years of the amalgamation of the Northern and Southern protectorates of Nigeria.
The Federal Government described Adenuga as a distinguished entrepreneur and renowned employer of labour in Nigeria.
Ninety nine other eminent Nigerians were honored at the event in various categories ranging from “Contributors to the Making of Nigeria” to “Heroes of the Struggle for Nigeria’s Independence/Pioneer Political leaders”, “Pioneers in Professional Callings/Careers”, “Pioneers in Commerce and Industry”, “Promoters of Democracy in Nigeria”, “Heroes in Global Sports Competition”, “Accomplished Pioneer Public Servants”, “Accomplished Contemporary Entrepreneurs”, “Distinguished Academics”, “Internationally Acclaimed Artists, Literary Icons and Journalists”, “Outstanding Bravery and Public Spiritedness”, “Outstanding Promoters of Unity, Patriotism and National Development” and “Exemplary Service in the Promotion of Peace and Moral Excellence”.
The awardees were officially given their awards at the Banquet Hall of the State House, Abuja.
Dr. Adenuga, who is also the Chairman of the Mike Adenuga Group, has been variously recognized for his exploits in the business world, his commitment to philanthropy and local empowerment, and for his passion for the growth and development of the Nigerian economy.
At different times, he has been honoured by the Federal Republic of Nigeria with the National Award of the Officer of the Order of the Niger (OON), Commander of the Order of the Niger (CON) and Grand Commander of the Order of Nigeria (GCON), the highest individual honour for a private citizen in the country.
During Nigeria’s 50th anniversary celebration, Dr. Adenuga received ‘Special Golden Jubilee Independence Anniversary Awards’ from the Federal Government, being among 50 pre-eminent Nigerians whose contributions in various fields of human endeavor had helped to move the nation forward.

In 2010, Thisday readers voted him ‘Nigeria’s most outstanding business personality in the last 50 years’.In an online poll conducted by the newspaper, the chairman of Globacom polled 4272 votes to edge out Alhaji Aliko Dangote who scored 4156.
Dr. Adenuga has made indelible marks in strategic sectors of the economy, which includes oil and gas, telecoms, aviation, banking and real estate, making him one of the most famous names on the African continent.

His telecommunications company, Globacom, is one of the most innovative networks in Africa, with presence in Nigeria, Ghana, Benin Republic and footprints in Senegal, Gambia and Cote d’Ivoire.
In 2010, his telecoms firm commissioned its international submarine cable, Glo 1, providing a solution to the long-standing problem of insufficient internet bandwidth in Africa. The attendant international connectivity helped to usher Nigeria into an era of enhanced connectivity.
In 2003, Globacom introduced per second billing when other telecom operators said it was impossible, and crashed the price of SIM to as low as N100, leading to an era of productive competition and the much talked about telecom revolution in Nigeria. The network also pioneered such revolutionary products as Blackberry, mobile internet and mobile banking services in Nigeria.
In the oil and gas sector, Dr. Adenuga’s Conoil Plc is one of the largest and most profitable oil marketing companies in Nigeria. Conoil Producing, the downstream arm of the conglomerate, made history by becoming the first Nigerian company to strike oil and produce it in commercial quantity in 1991.
In banking, one of Dr. Adenuga’s banks, Equitorial Trust Bank (ETB) was one of the few banks that met the N25billion capital requirement during the 2005 banking consolidation exercise without going to the stock market. ETB merged with Devcom Bank, also owned by Dr. Adenuga and later Sterling Bank, which is today one of the foremost banks in Nigeria.

Dr. Adenuga also has a multi-billion dollar investment in real estate.
His companies provide direct employment to thousands of workers and millions of others indirectly.
Globacom is the biggest supporter of football in Africa and has raised the profile of football in Nigeria with the sponsorship of the Glo Premier League and all the national football teams of the country.
The company has so far spent over N9 billion in cash and kind on Nigerian football. It has also transformed the annual CAF Awards and made it the most glamorous sports event on the continent. CAF has awarded Adenuga the Pillar of Football in Africa for his strong support for African Football at both national and continental levels.
Dr. Adenuga was born in 1953, in Ibadan. He attended the famous Ibadan Grammar School, in Oyo State, Nigeria, for his secondary education and studied Business Administration at Northwestern State University, Alva Oklahoma, in the United States. He also earned a Master’s degree at Pace University, New York, majoring in Business Administration with emphasis on Marketing.
He holds an honorary doctorate degree conferred on him by the Ogun State University.