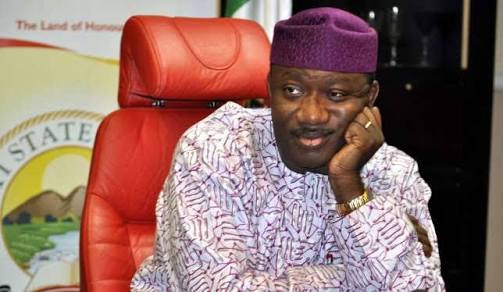 As this present administration is under intense pressure to deliver on its campaign promises to the masses, President Mohammad Buhari is presently mulling the idea of sacking the current Minister of Solid Minerals, Kayode Fayemi, whose performances so far, according to sources at the presidency is seen by the President as not up to scratch. Our Aso Rock sources have reliably informed us that Kayode Fayemi may be on his way out of President Buhari’s kitchen Cabinet because of what the latter has termed ” lack luster performances” at his duty post which according to reports is not moving the all-important Solid Minerals ministry forward by one bit.

Global News further learnt that this substantive Minister who was one of the political big-wigs in the South-West that helped Buhari wrestle power from the PDP-led administration of ex-President Goodluck Ebele Jonathan through the usage of resources and ideas at his disposal during the electioneering campaigns of the All Progressive Congress (APC) party. Fayemi did a yeoman’s job in the run up to the 2015 general election and this was recognized by Buhari.President Buhari duly compensated Fayemi with a ministerial role in the ministry of Solid Minerals. However, it took a while before Fayemi could settle down on his job in this ministry as he had thought Buhari was going to name him as the Foreign Affairs Minister and had actually planned on becoming the face of Nigeria at differentfora of the comity of nations and the United Nations. We also gathered that Fayemi, before the release of Buhari’s ministerial list was already been touted as the country’s next foreign chief by his admirers. And he was already practising the art of international public speaking. He was, to himself a non-career seasoned diplomat per excellence. And rightly so if his international exposure is anything to go by.But alas, the office he had prepared so well for went to another gentleman who did not really contribute to the successful campaign and clinching of power of Buhari. This infuriated Fayemi so much. Not only because he was well prepared for this new role in the Solid Minerals Ministry but because Fayemi sees himself as a good lobbyist and rapporteur of international repute with the needed skill to guide the nascent Buhari regime in the area of international relations. But as you read this, our sources informed us that Buhari is not happy with Fayemi’s performances and his little strides since he was sworn in Minister. Buhari, we learnt, has also noticed that Fayemi whom he thought was a versatile technocrat is a round peg in a square hole and has since started using him as an “errand boy” on Special Duties assignment. Buhari now sends Fayemi to duties outside of his ministry as he pleases because he (the President) is not happy with the way the Fayemi has not been able to activate the mining sector which is very key to this administration. We hear our Minister of Solid Minerals is currently hanging loose in the Cabinet as he himself is already in the know that the President is just ordering him around to do assignments outside of his ministry. As a matter of fact, our sources also informed us how Buhari gave the assignment of co-ordinating the recently concluded Ondo State gubernatorial poll which was won by the ruling All Progressive Congress (APC) party to Fayemi. This is the type of ad-hoc duties Fayemi now does for his boss. Even friends and close associates are now suspecting that Fayemi is now fast turning to an “errand boy” in the presidency. Our sources also hinted that the President has wrapped up plans to remove Fayemi any time soon because the Ministry’s roadmap mapped out by Fayemi is not moving the ministry forward as far as the President is concerned.