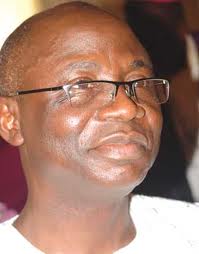 Nigeria’s most controversial pastor is at his controversial best. Recently the senior pastor of the Latter Rain Assembly and former running mate of Maj-Gen. Muhammadu Buhari in the last presidential election, Pastor Tunde Bakare, lambasted the president in an interview for what he described as an insult to the office of the president for kneeling before Pastor Enoch Adeboye, the general overseer of the Redeemed Christian Church Of God (RCCG) because of what he described as the beginning of the president’s political campaign for the 2015 elections.

Information at our disposal also revealed that the Presidency did not see anything meaningful about Tunde Bakare’s outcry. In the words of one of Jonathan’s aides who would not want his name to be in print, the Presidency described him as a ‘confusionist’ who is working day and night to cause crisis in the country. It was further said that it has never crossed the mind of anybody in the Presidency to visit his church, going by the belief that there is hardly any sensible thing that would come out of attending service in the church of such a fake pastor, whose prophesies are always full of lies and Jonathan will not stoop so low to go to his church because he wouldn’t gain anything from the church

It is known that the fiery-talking pastor has for some time been doing things the opposite to the ways of Pastor Adeboye whom he had worked under at a time at the RCCG before he decided to pull out with the church congregation to form his present church. He had once accused the very respected man of God of being ungodly in the way he does things; in another occasion, he had called him a liar and he has always been quick to criticize anything that comes from the man generally referred to as Daddy GO. He has also been finding himself at the opposite side of the president though he had once fought for the president while the latter was still a vice president. And his involvement with General Buhari during the last election which was won by President Jonathan further draw them apart, so the latest outburst is not unexpected.

In reaction to his latest outbursts, some of the  pastors of the Redeemed Christian Church of God, RCCG,  who spoke to us  explained that Bakare is somebody  who is seriously looking for undue recognition to cover up for his failures in all ways including the election. Another added that the lawyer-turned-pastor is just envious of the GO who still sees him as one of his children and that the church will not join issues with him, because he’s just being unnecessarily troublesome which accounted for why he reads different meanings to everything that has to do with the church.

It would be recollected that the pastor was some time ago invited for questioning by men of the State Security Service (SSS) where he was asked to tone down his sermon against the government so as to avoid causing unrest. After his recent interview, there were indications that he may be re-invited by the SSS as he lambasted the president with careless abandon. In his words: “By going to kneel down in the open before Pastor Adeboye, the man (Jonathan) did not even recognize the dignity of his office. If it were a private thing, it is okay for you to crawl or kneel but it is a whole nation. That office has been diminished by a man who does not know the worth of it and does not deserve to stay there for one more day.”

Pastor Bakare did not also spare the church as he questioned the impact of the church. According to him, “What is the impact of the church in this country other than to pray for men who have stolen the treasury and wealth of the nation and coming back to give us different kinds of gifts; giving us jets and all kinds of things that will silence us so that we cannot speak the truth to power?” He went further to condemn the administration of the president stating that “under Jonathan’s leadership, Nigeria as a whole has become a titanic ship on sail to hit the iceberg and sink. Right-thinking people must rise to rescue the helm of that ship from his (Jonathan’s) hand before he wrecks the entire nation. We have promoted men who have no mental capacity to do what we ask them to do.”