Life again imitates art as another on-screen couple marries in real life.As the set of
Mr and Mrs Smith film in far away United States of America paired Angelina Jolie and Brad Pitt in real life, “chronic bachelor” Oluwabankole Wellington,popular known as Banky W was surprisingly taken off the “market” by delectable Adesua Etomi from the set of the much-acclaimed Nollywood blockbuster – the Wedding Party. 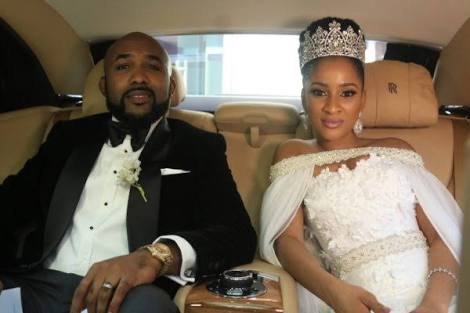 Last weekend,one of the nation’s most eligible bachelors bade farewell to his long stay at bachelorhood when he got engaged to drop-dead-beauty Adesua Etomi who is currently making waves in Nigeria’s film industry.

As soon as the news of the engagement of Banky W and Adesua Etomi became public knowledge,the social media went into an overdrive and the public almost brushed it aside thinking it was another publicity stunt for the sequel to the number one top grossing film of all time in Nigeria- “The Wedding Party”- where both Banky W and Adesua played husband and wife.

Banky W,the”Mister capable” crooner who is arguably Nigeria’s number one rhythm and blues singer has remained single for many years and remains the most eligible bachelor in the nation’s music industry before Nollywood actress Adesua Etomi took him off the shelf.

According to inside sources, the love affair between the two started on the set of “The Wedding Party” and some actors on the cast of the Nollywood blockbuster were in the know immediately the two fell in love. We gathered that Nollywood icon,Sola Sobowale
Immediately smelled the love affair but kept it to herself but was keeping tabs on the duo on and off the set of the film.

Meanwhile, Global News gathered that both Adesua and Banky hit it off right away and did not waste time beating about the bush. According to a source close to one of the lead characters on the set of “the Wedding Party”, it was indeed love at first sight for the two lovebirds once they set eyes on each other. The source also hinted that it was actually Adesua that summoned courage first before Banky W expressed his strong feelings for his pretty babe.