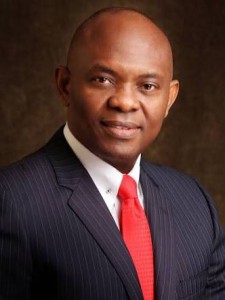 The Tony Elumelu Foundation and United Bank for Africa Plc (UBA) partnered with the United States Department of Commerce to host a panel and roundtable discussion between members of the U.S. Presidential Council on Doing Business in Africa (PCDBIA)and a diverse community of African entrepreneurs.

The 11 person U.S. delegation, along with representatives of several U.S. government trade and investment-focused agencies, was led by the Honourable Penny Pritzker – U.S. Secretary of Commerce. The Council visited Lagos as part of a fact-finding mission to help inform their upcoming report to President Obama on how to strengthen commercial engagement between the U.S. and Africa, which will result in mutually-beneficial growth.

The event – titled “Unleashing Africa’s Entrepreneurs: Strengthening the Entrepreneurial Ecosystem to Empower the Next Generation of Africa’s Business Leaders” – brought together American business leaders and Nigerian entrepreneurs to discuss challenges, solutions and innovations in the current African business environment. The event was designed to allow representatives of the U.S. Government to participate in direct and substantive discussions with Africa’s emerging business leaders – an opportunity to engage in a dialogue that has the potential to influence U.S. foreign policy for Africa.

“President Obama believes, as I do, that the American private sector, working in partnership with the African business community, and African entrepreneurs can help address many of the continent’s most pressing challenges, including creating jobs and opportunity for young people across the continent,” said U.S. Secretary of Commerce Penny Pritzker. “I am proud to lead our Administration’s effort to support and empower aspiring entrepreneurs, both in the United States and across the globe.”

UBA Chairman Tony O. Elumelu, through his eponymous Foundation, hosted the delegation, and expressed gratitude for the collaborative approach the Council and U.S. Commerce Department are taking in engaging local entrepreneurs as part of their deliberations.

“Too often, well-meaning foreign policy-makers develop strategies to help Africans without actually engaging us,” he said. “In order to effectively help or support people, we should ask them what kind of help they want. So, I thank you for doing that with African businesses.”

Expressly designed to address the needs of and provide opportunities for the next generation of African entrepreneurs, the entrepreneurs in attendance included SMEs supported by UBA Plc, UNCTAD’s EMPRETEC Nigeria Foundation and those selected for the Tony Elumelu Entrepreneurship Programme (TEEP) – a 10-year, $100 million commitment by the Tony Elumelu Foundation to empower the next generation of Africa’s entrepreneurs with businesses that have the potential to generate income and jobs for their nations.

The Tony Elumelu Entrepreneurs in attendance were selected from the Agriculture, Media & Entertainment, ICT, Transport, Healthcare and Financial Services sectors. Their startups reflect the potential that entrepreneurship holds for spurring Africa’s transformation; already, they have begun creating jobs in their local communities and generating tax revenues for governments earning them recognition in both local and international media.

ABOUT TEEP
TEEP is a commitment by the Tony Elumelu Foundation to identify and fund 10,000 African entrepreneurs over a 10-year period. It is our answer to the question of how to catalyse change on a massive scale across Africa, seeking to add $10 billion of additional revenues to Africa’s economy; provide over one million new jobs; and create a new generation of empowered entrepreneurs. TEEP commenced in December 2014, with a funding pledge of Naira 17bn (US$100m equivalent) by the Foundation and the inaugural 2015 round drew over 20,000 applicants from 51 African countries. Read more about TEEP at www.tonyelumelufoundation.org/teep/about-us.