Wild spread protests may be trailing the emergence of Willie Obiano as the candidate of APGA in the forthcoming governorship election in Anambra State.  The protests it was discovered stem from his unpopularity and the fact that many people see him as being imposed on them roughshod.

Significantly, different segments of the Anambra polity ranging from aggrieved aspirants, party members, stakeholders and observers drawn from a spectrum of civil society organizations and activists are united in condemning the high handed tactics and denial of level playing ground during the primaries.

Investigation shows that APGA’s Image as a result has been severely battered and decimated.  The erstwhile good prospects of APGA coming tops in the governorship election has been squandered, just as it is generally believed in many circles that APGA ironically has surrendered the right of occupancy of the Anambra State Government House to the rival parties.

Analysts have predicted that APGA will not only lose the election but it will be trounced woefully.  The primary reason for this conclusion may have arisen from the supposed inordinate ambition of the incumbent Governor Peter Obi to perpetuate himself in office through a crony, after an uneventful eight years in office. Analysts argue that instead of allowing credible process in accordance with the overwhelming demands and expectations of the party members and stakeholders, Obi breached the process by ‘arrangee’ method that manufactured his choice candidate.

Disgruntled aspirants have continued to protest and ridicule the flimsy excuses that led to the disqualifications of formidable aspirants.  They maintain that the only reason why highly acknowledged, accomplished and eminently qualified aspirants were bulldozed out of the primary race is Obi’s hidden agenda to enthrone his political godson.  More worrisome and objectionable to the disenfranchised aspirants is the acknowledgement and realization that Obi’s anointed choice candidate is ill suited and marginally experienced to fit into the serious and challenging position of governor of Anambra State.  The Peter Obi – Willie Obiano connection has been aptly dubbed trade-by-barter-political-transaction and does not augur well for Anambra State.

Another irksome subject for party members and stakeholders is the acceptability and marketability of Obi’s flagbearer to the Anambra voters.  APGA parades array of eminently qualified and well-exposed aspirants whose legitimate ambitions were cut short by Obi’s buccaneer style of leadership. Many people are at odds to appreciate what informed Obi’s preference for a weaker candidate perceived generally to be no match for tested candidates. People are wondering if Obi has invented or deviced any other means of selling his preferred candidate to the Anambra voters against the obvious more viable and formidable choice APGA would have produced if the primary had been a transparent The consolation of the protesters however seem to lie squarely in the fact that they believe in the immutable philosophy: you can fool some of the people some of the time; some of the people all the time; but you cannot fool all the people all the time. In other words, Obi may have had his way in stage managing and rigging the primaries but cannot ‘steal’ their votes in the INEC organized and supervised election?

Political observers have said that the party primary exercise conducted by Obi equally lacked credibility and openness.  Qualified aspirants from the three component geo-political units of Anambra State were pre-disqualified by Obi.  In essence, Obi duplicitously used the self-serving case of equity to befuddle APGA simply as a tool to his man – Friday, Obiano in Government House Awka, as his replacement.  They argue that this stratagem is a mark of desperation and obviously self-defeating for APGA in the forthcoming election.

Festus Okosi, a keen watcher of politics in Anambra State said the emergence of two rival candidates has already spelt down for APGA.  “There is every likelihood that for APGA the endgame is here.  The electoral provisions is for single candidate to represent a party, or in the event of non-compliance, the party in question stands disqualified. Obiano and Obidigbo candidatures only mean as it stands presently APGA is disqualified, courtesy of Obi’s pursuit of personal agenda.”

He said that the prevailing sentiments accordingly are party members’ votes which ought to form the backbone of the block votes in elections have been compromised already, and accordingly APGA members will certainly cast their votes as protest votes against APGA in favour of the candidates of rival particular parties. 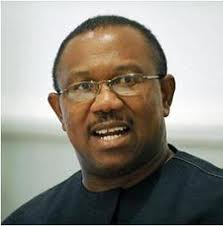