A look at 32 year-old Sani Saidu , will never pass him for a betrayer, let alone a killer , owing to his quiet disposition and soft way of speaking. But his disposition has only proved to be deceptive after all , as he is currently cooling his heels at the Lagos State Criminal Investigations Department ,SCID, Yaba , Lagos, over a case of alleged murder.
The Gombe state born suspect allegedly stabbed one Mr Shittu Aremu, driver of a truck to death while accompanying him to Port Harcourt, Rivers state, destination of the 40,000 litre of petroleum product .
The late Aremu whose age was put around 56 years, was a driver to S.K Transport Service Nigeria Limited . He reportedly loaded the truck with plate number AGL 368 XA with aviation fuel worth N5.5 million and consequently left Lagos for Port Harcourt on November 13, 2014, to discharge
the product.
But before leaving Lagos State, he was said to have invited Saidu to work with him as his motor boy, with a promise to pay him an undisclosed amount at the end of the trip. But little did he realize that the invitation would end his life.

The first sign that signalled an unpalatable situation for the truck driver, followed difficulty by his employee to reach him on his mobile phone, two days after he embarked on the journey.
Further checks from the tracking device on the truck reportedly showed that the truck had been diverted from its original route to somewhere around Mutum Biu, in Taraba state.
Suspecting that the driver had a sinister motive up his sleeve ,the company reportedly lodged a complaint at the State Criminal Investigation Department SCID, Yaba, where detectives swung into action by travelling to Taraba state. Fortunately for them, the truck was recovered at the Taraba state Police Command, with only Saidu, the motorboy.
I stabbed him, threw him out of the truck
Preliminary investigation as gathered , revealed that Saidu allegedly murdered the truck driver before diverting the truck to the northern part of the country.
In this interview, Saidu gave a graphic description of how he stabbed his master with a knife and threw him 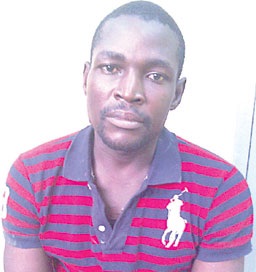 out of the truck , before taking over the steering..
Asked what made him carry out such dastardly act, Saidu replied : “ I killed Mr Aremu because I wanted to sell the aviation fuel and use the money to travel to Dubai on a business trip”
Narrating how he snuffed life out of Aremu whom he fondly called baba Oyo, , Saidu said: “ A day after we left Lagos, at about 6pm, the company called baba Oyo and instructed him to park at Umunede, Delta state for security reason and that he should proceed on the journey the following day.
While there , I bought a knife without him knowing and tied it with a rope on my leg. Very early the third day, baba Oyo started the ignition to continue the journey. As he was about to move, I told him that one of the tyres had developed a fault. I came out of the vehicle and pretended to be checking the tyres. I went to his side of the truck, bent down as if checking the tyres and in the process, I brought out my knife. But as I raised my hand to stab him, he held my hand and we started struggling, in the process of which the knife cut me on the index finger. I succeeded in stabbing him first on the lap and blood started gushing out. Again, I stabbed him again in the stomach, leaving the knife in there. By then he was too weak to shout.
Thereafter, I pushed him out of the vehicle and mounted the driver’s seat and zoomed off.
Diverts truck to the north
My intention was to take the aviation fuel to Taraba state and sell it at the black market. When I got to Adamawa state, I sold four drums , at the rate of N28,000 per drum. On reaching Katsina Ala, the truck developed a fault and I ended up spending N57,000 to fix it. I continued the journey but on reaching Mutum Biu, I was stopped by some soldiers who were on a joint operation with the Police, at a check point. They demanded for the way bill and I showed them.
But one of the policemen asked where the plate number was and I brought it out from where I kept it. I had earlier removed it because the company’s number was inscribed on it. When the policemen dialled the telephone number, they discovered that the vehicle was supposed to be heading for Port Harcourt. When they asked what it was doing at Taraba, I could not provide a ready answer and I was subsequently apprehended.”
I wanted to raise 150,000.
The father of five whose family resides in Adamawa state further disclosed that “ I did what I did in order to raise N150,000 for a ticket to Dubai. A friend of mine who lives in Kano usually travels to Dubai to buy handsets and sell in Kano. He told me he would take me down if I could raise N150,000. That was why I did what I did. But with the look of things, it is obvious that I am in a big trouble and may never come out of from it for the rest of my life”, he stated remorsefully.
Information at Crime Guard’s disposal revealed that operatives at the SCID would be leaving Lagos for Umunede in Delta state, to inspect the spot where the suspect claimed to have thrown Aremu’s body, with a view to ascertaining whether he is alive or not.
Police sources however hinted that the driver’s seat of the recovered truck was stained with blood, adding that at the end of investigation, the suspect would be charged to court for murder and stealing.