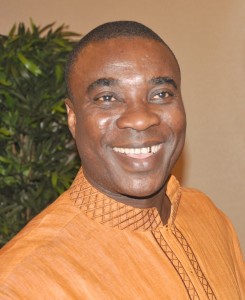 When it was reported that King of Fuji Wasiu Ayinde popularly known as K1 shunned and disgraced his long-time fan and benefactor Godwin Anabor at a popular night club in Lagos many people came to his defence and claimed that the Ijebu-born Fuji czar could not do that to those who have helped him in the past.
However, the controversy that the rumour generated had hardly gone down when the classical Fuji exponent behaved true to his character by disgracing another of his fans at a musical show held in Ikeja towards the end of last year.
On the fateful day, Omotosho stood up to appreciate the Fuji musician who at first mentioned his name briefly before he sighted two of his fans who are more loaded in terms of cash and whom K1 had known long before Omotosho came into the social scene. He turned his attention and started praise singing them to high heavens and completely abandoned Omotosho who was still standing confused and embarrassed on the podium with loads of cash in his hands. Many people were looking at him and making jest of him that Oluaye had turned his back on him. When he managed to get himself back, he stormed out of the stage and went back to his seat. We further learnt that when Oluaye was finally done with his loaded friends his boys probably informed him that Omotosho was angry because he abandoned him for the other socialites. This we learnt infuriated Oluaye, as he is fondly called, and he went to Omotosho shouting at him in Yoruba “N gbo, won lo n binu ki ni e to n binu. Ma ba mi try iru e mo…” (meaning, ‘I was told that you’re angry, who are you. Don’t ever try such with me again’).
What was funny that day was that the visibly embarrassed Omotosho could not say anything and on top of his money he was even the one on the offensive side and this made many people who were there watching the display of arrogance and show of shame from K1 to conclude that there must be something behind it if again he spends his hard-earned money on K1 again but others quickly said he is going to do it again because it’s a passion he’s deriving pleasure from.