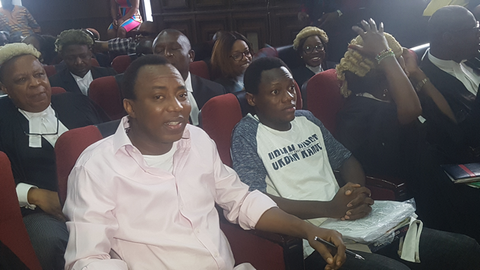 Justice Ijeoma Ojukwu of the Federal High Court in Abuja on Wednesday issued the warrants for the release of the convener of #RevolutionNow protest, Mr. Omoyele Sowore, and his co-defendant, Olawale Bakare, from the custody of the Department of State Services.

Their lawyer, Mr. Femi Falana (SAN), had earlier said during Wednesday’s proceedings that his clients had met the bail conditions imposed by the court.

Our Correspondent saw copies of the warrants for the release of the defendants signed by Justice Ojukwu after Wednesday’s proceedings.

Both Sowore and the defendants had been in the custody of the DSS for over 90 days.

Falana told our Correspondent on Wednesday that the warrants for the release of the two defendants were served on the DSS in Abuja on Wednesday after the judge signed them.

He said the warrants had yet to be complied with by the DSS.

“The warrants of release were served on the State Security Service by the court bailiff and some of our lawyers on Wednesday.

“But they were asked to come back tomorrow (Thursday),” Falana told PUNCH.